What do you do when your antique/fully rebuilt truck is totaled and insurance doesn't want to give you the money for the parts and time you have into to it? The back story: It all began because I, Brittany, bought a 2002 to VW Jetta that was converted to run on waste vegetable oil (WVO). The WVO oil was part of the car was great, the 2002 Jetta part of the car was a lemon. If we were going to continue with the WVO thing Russ said we needed a different vehicle... something older... something without a computer in it. (He was a bike mechanic, so he understood moving parts, computers were a whole different game that he would later figure out). After lots of research he said to me, "What we need is a 1980 VW Rabbit Pickup." This was in 2008. So he began looking for a truck the same age as us!  What?!?! Okay.

He came across a beautifully restored golden brown 1980 Rabbit caddy in California for $6900. He flew out there, barely knowing how to operate a manual/"stick shift" and drove it back to Utah. We puttzed (literally) around in that truck for several years. One thing at a time would fail on it. And one thing at a time he would fix on it. As frustrated as he was about all of the work he had to do on this "restored" vehicle, all of those lessons led him to the 25+ trucks he has saved from the junk yard. 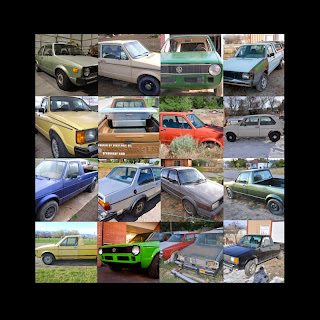 In 2010 we sold the little brown truck and upgraded to a 1996 VW Passat TDI, with AC and airbags. But his love for the early 80s caddy rebuilds continued. 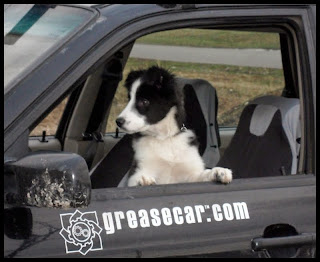 With each vehicle that would come into our driveway he would say, "This is in the one. This is the one I will fix up and keep." And the day would come that it was finished and he would look at a truck/car and his eyes would see "$$$$$ $$$$$$" and he'd post it on the Vortex or Ebay or KSL and it would sell in a matter of days. 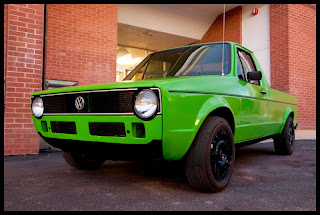 Then one day, after about 10 months of work and some slime green paint with black trim and interior and a rebuilt TDI engine. He had found "the one". There was no puttzing along in this one. It had a TDI (turbo diesel engine) in it. He was pulled over several times for speeding in the green truck! He had to admit, as much as he loved this truck and with our pending move to China, this truck also had a price tag. He had it insured for $7000, but if someone wanted to give him $8000 for it, he would let it go. He had a guy on the line for it for that amount.... until I was rear-ended by a guy that caused a four car pileup four weeks back. The green truck is totaled. 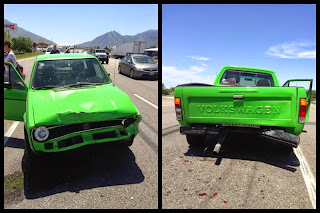 So now to the point of this whole post and to hopefully help someone in a similar situation in the future. What do you do when your antique/fully rebuilt truck is totaled and insurance doesn't want to give you the money for the parts and time you have into to it? The guy who rear-ended the woman behind me, causing her to hit me, causing me to hit the car in front of me was fully at fault for the accident. His insurance, we will call "Insurance P", valued the truck at $3900. That is quite the kick in the pants to a guy who had more than that into it in parts alone. Not counting the $3000 in labor. So we called our insurance to see what we could do about it. We thought it would be easy cheesy, since we had it insured for $7000. Little did we know that that would only be the case if we had it appraised within 2-3 months of an insurance claim. Never the less, we filed a claim through our insurance knowing that we would still have to pay the deductible. The adjustor that came out didn't seem too optimistic that we'd see $7000. After some feeling bad for ourselves for a bit, we reflected on what the fundamental concern for an insurance company was. It is not making sure that people are protected or that their things are valued. Their fundamental concern is the bottom line. MONEY. They only want to pay out what they can prove is the value of something. So Russ and I went to work to dig up receipts for all of the parts in the truck, the rebuild of the engine and injection pump, we even submitted a bill of sale of a similar truck that Russ had sold a few months back. 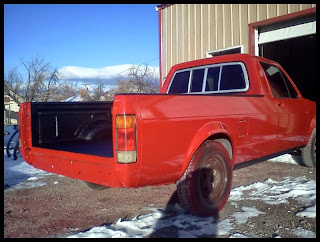 There was no way for insurance to find a comparable on a 1982 body, with a custom European front end put on it, with a rebuilt turbo diesel engine with only 3,000 miles on it, and a brand new paint job and restored interior.

But we did the best we could to provide all of the information the insurance companies could possibly want and then we anxiously waited for a phone call from each insurance company. Insurance P called back saying that none of that info made a difference and they were sticking with the $3900 value. So I braced myself with pen and paper when our insurance called....they valued the truck at $7440!!!!!! It wasn't the $8000 that Russ was expecting to sell the truck for, but it was so much more than we were expecting the insurance company to be willing to give us!!! And Russ was able to buy the truck back with a salvage title for $350 and he can part it out. The engine is still great and all of the other valuable 1982 rabbit specific parts are salvageable, so in the end Russ will come out ahead. So the moral of the story is... save your receipts, be willing to stand up for yourself, do some leg work for the insurance company, and be Russ (because you can do something with all of the leftover parts!).
Posted by Brittany at 10:31 AM No comments: