Peak Diaries: The Travel Queen (trailer) from PowderLines.Com on Vimeo. 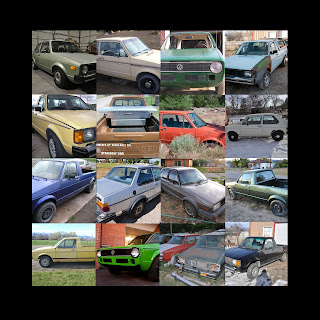 7 Years ago we bought are first VW.  Since then I have taken on the task of saving as many as I could from Junk Yards to fields.  Some would get full rebuilds with new engines and paint.  Others would be sold as shells for someone to start their own VW rebuild, moreover some would be turned into grease cars to travel the US.  To date I have saved over 20 VW's from either being crushed or parted out and the number is still rising!
Posted by Hopkins at 1:34 PM 1 comment: 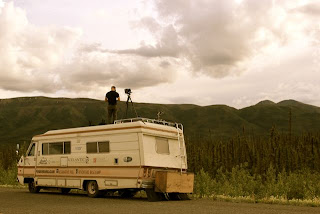 Summary of Our Grease Home Adventure to Alaska

It started with a conversation Russ and Sean had and it quickly became a reality.  We bought the 1977 Travel Queen with a 1993 Dodge Cummins diesel engine for $2,000 in January of 2012.  The remodel (interior pictures before and after) took over the next several months with final touches on the waste vegetable oil fuel system happening the day before we hit the road.  All of the stickers on the side are from the various sponsors that Sean and Mollie were promoting on the adventure (read Mollie's blog here).  The major sponsor being Goal Zero, a Utah based solar power equipment company that gave the Travel Queen her electrical power source, solar panels and a yeti generator and inverter.
Sean, Mollie, Russ, Ava, and I (Brittany) set off on May 31, 2012 with a tentative itinerary and a lot of excitement, that was challenged but not conquered along the way with a variety of mechanical problems.
In the end we drove 7014 miles on waste vegetable oil.  We had a one of a kind adventure of meeting people along the way, talking about and living sustainability, and seeing the incredible landscape between Utah and Alaska. 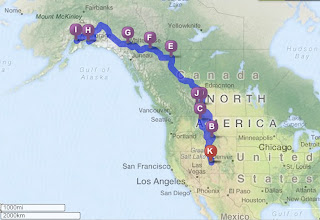 Click on the following blue links to see each Picasa photo album:

Album Five
Posted by Brittany at 9:22 AM No comments:

Posted by Brittany at 8:17 AM No comments:

School's out for summer!  We have a couple of faculty meetings Tuesday/Wednesday.  And then..... We're off!!!!
It has been a busy couple of months.  But it has been an especially busy couple of days.  The tentative plan is to leave Thursday and head north to Yellowstone...stop over in Whitefish, MT....then up towards Calgary and Banff...then diagonal up to the Yukon...over to Anchorage and then back.

Please send happy thoughts to all of the restaurants along our journey that they will want to give us their WVO (waste vegetable oil).  The Travel Queen loves her grease like the best of the fuel guzzlers out there.

Some updated photos of the TQ:

In addition to continuing remodeling work on the 1977 Travel Queen Home Vehicle, I have been happily practicing my slacklining skills.  Gibbon Slacklines gave us two lines for us to take on our Grease Home Vehicle (GHV) Alaskan Adventure!  I had never heard of a slackline before the super bowl halftime this winter and now I'm in love!  I practiced yesterday for an hour and a half and woke up this morning very aware of just about every muscle in my body.  I want everyone to know that this is HARD!!! But so much fun!!!!  I am excited for all of the slacklining that is in my very near future all on our drive to Alaska in T minus 3 weeks!  I also want to give a shout out to my incredibly comfortable Twist Tank Top by Lole in these pictures.
For more information about our Grease Home Vehicle adventure here is a link to Mollie's blog.  She has also been doing updates about our adventure and will probably be more regular about updating on the trip.  So if you want to stay tuned along the way, I recommend you subscribe to her blog, too: http://themollieshambeaushow.com/2012/04/travel-queen-update/
Posted by Brittany at 11:20 AM 1 comment:

I recently realized that I've never documented the process that we (mainly Russ) goes thru to make it possible for us to drive a car the runs on waste vegetable oil (WVO).  So here it is.... 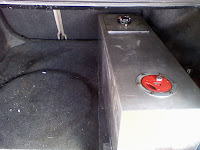 Russ and I and our friends Sean and Mollie are now proud owners of a 1977 Travel Queen Motor Home with a 1990 Dodge Cummins diesel engine.  If you are a regular follower of our blog you can probably guess what that diesel engine means to us....
It will soon be converted to run on vegetable oil!
Enjoy the 1977 interior in the pictures alone because it has already been taken out as the remodel of the interior has begun.  We all know that Russ doesn't do anything halfway.  So very soon we will be traveling in comfort and in style.  I will update pictures throughout the process and details about the upcoming adventures we are planning to have in the travel queen! 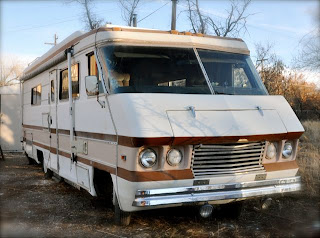 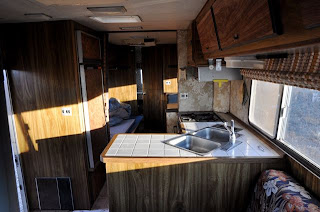 In order to get the old and broken refrigerator out of
the motor home Russ had to cut it in pieces.  He learned
that freon is combustible. This video is not sped up...
He can move fast!!!!!!!