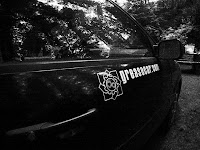 Brit and I have just returned
from a road trip through Canada.
When it was all said and done we
covered 2875 miles. About 1600
of that was on waste vegatable
oil.
First we headed straight North into Montana. The plan was to go through
Glacier National Park but the road was closed due to rock slides and snow
so we traveled North again and crossed the boarder into Canada. We spent
the night in Calgary and with the intent to head into Banff National Park in
the morning. Turns out the Calgary has the largest skatepark in North America
so we headed over there at about 9 pm. The park must have been built in the
mid 90's because it was horrible.
Made are way through Banff the next few days with plenty of rain and driving.
We then dipped down back into the U.S. to vist our good friends Lesley and Joe.
Britt flew out to Texas after that to see the fam damly. Lesley and I got a wild hair
and decided to go to Whistler up in Canada to check out the down hill MTB scene.
First day the weather was great...second day was a bit rainy and with more on the
way we called it and head back to the good old U.S.A.
Posted by Hopkins at 1:27 PM

Nice!!! The cool thing about the video is that no one can see all the mosquitos that tried to eat us alive whenever we stopped. Maybe that and the beer situation prove that no place is perfect.