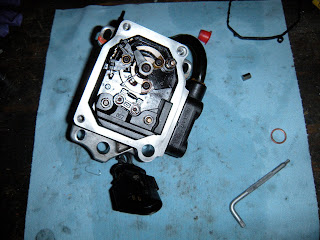 Well 3rd grease car we have built is now complete. First a 2001 Jetta, piece of junk. Then a restored 1980 vw rabbit pick up. Great truck and many memories. We have now moved on to the rare 1996 vw passat tdi wolfsberg addition. This car was manufactured in Germany and is the most coveted TDI ever made from VW, besides the wagon version.

It had been a great car on diesel for the 6 months or so that we owned it. Now that the house is done I got around to converting it to veg. On that same day that I finished it a very strange thing happened which involved many trips to the local mechanic, (no answers), downloading VW's VAG-COM software, and finally ordering a new quality controller.

It turns out this is what happened. While driving on the maiden voyage on vegetable oil the switch from greasecar.com was bad. This pressurized the injection pump causing the over flow valve to pop out. At the exact moment that happen my foot was on the gas but decelerating. The spring shot out and got trapped in a tiny spot holding the throttle open. This in turn resulted in the car starting but the computer shut off the accelerator because the throttle was stuck open by the spring. Lots of head ache latter I figured this all out and fixed it. The scan tool for the computer said the injection pump was bad $2200.00. Turns out the part I needed was $50 good thing i took it a part first.
Posted by Brittany at 10:31 PM