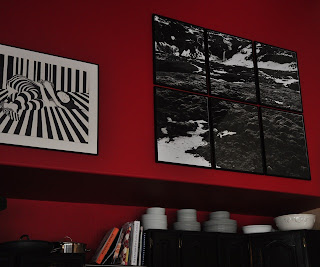 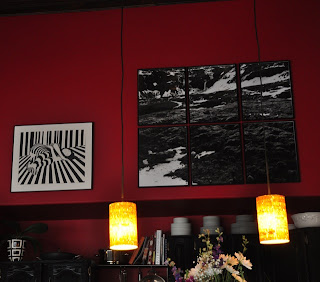 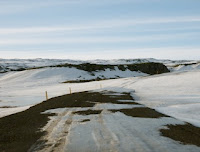 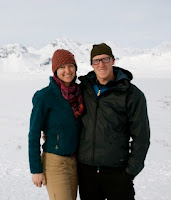 A huge reminder of a crazy adventure we had on our spring break trip to Iceland is now hanging above our kitchen. We were trying to take a short cut from the south side of the island to the north side. At first the windy road was covered in a little snow, then a little bit of ice, then a lot of snow and ice. It was crazy...eventually our little rental car wouldn't take us any farther and we had to turn around. I turned into rain man as what was scary going up was treacherous coming down. It was about 5 PM and the lighting was perfect. The fields of moss and lichen covered lava rock were stunning with waterfalls cutting thru the cliffs in the distance. I kept mumbling and rocking "We just gotta get down. We just gotta get down." While Russ stopped the car to make the his best image of the entire trip. The negative is a 4"x5" black and white image. They don't make black and white photo paper as big as Russ wanted to print it, so he did some MacGyvering with his large format enlarger and laid the paper on the floor. He basically made six separate prints from the one negative. You will have to visit the straw bale house to get the full joy of the details in this photograph.


The striped image on the left is a drawing done by one of Russ' students of one of my students!
Posted by Brittany at 3:58 PM